International Festival, where dance, music and entertainment are the attraction of these days which this year reached 40 years. Organized by Adifolk, an association that is dedicated primarily to promote and disseminate art, traditional and popular culture throughout the world. Each year international groups come to Calella with their costumes, dances, their music and crafts to show both in Calella as well as in other towns of Catalonia what their cultural traditions are.

These are celebrated within the first 2 weeks of September. 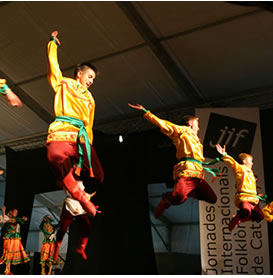