A town in the region of Garrotxa, standing at a height of 150 m. and as its name indicates, it was a fortress between two rivers. In 1966 due to its architectural value, it was declared a “National Historical Artistic site.”

In every corner, and every street we sense the medieval atmosphere that makes it peculiar. It can be considered the best preserved of all the elements from that time, as well as the monasteries, churches, façades, Jewry and especially the Miqvé.

Worth mentioning is the Roman bridge over the river Fluvià, of extraordinary beauty, which opens the doors to Besalú. 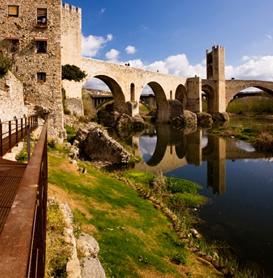 We use our own and third-party cookies for analytical purposes and to show you personalised advertising based on a profile of your browsing habits (e.g. pages visited). Click HERE for more information. You can accept all cookies by clicking the "Accept" button or configure them or refuse their use by clicking settings.

This website uses cookies so that we can provide you with the best possible user experience. Cookie information is stored in your browser and performs functions such as recognising you when you return to our site or helping our team understand which parts of the site you find most interesting and useful.

This website uses Google Analytics to collect anonymous information such as the number of visitors to the site, or the most popular pages.

Please enable strictly necessary cookies first so that we can save your preferences!