The sardana association is responsible for organizing such a spectacular cultural show in Calella. This event, considered the oldest one Catalonia, dates back to 1926 and is known as the “àplec Pairal” that brings together thousands of fans to the Sardana in early June.

On Saturday afternoon at the Paseo Manuel Puigvert and all Sunday at the Parc Dalmau, the best of Catalonia coblas delight us with their dance and music in an environment of celebration and culture. 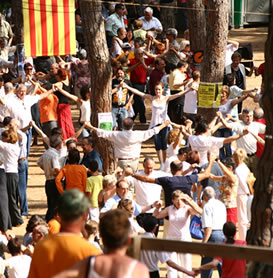